We’re going to focus on one item this week, a little thing having to do with Hurricane Dorian, President Trump, and the abuse of the phrase “fake news.”

It’s amazing to me how President Donald J. Trump can take a very small thing and blow it up into a really big ridiculous thing. Case in point, his erroneous tweet that Alabama was in the path of Hurricane Dorian. It wasn’t. In fact, the National Weather Service had to issue its own tweet saying that folks in Alabama didn’t need to panic or go out and buy lots of bread and milk or anything.

A normal person would have just said he made a mistake, but not President Trump. Instead, he refused to admit he was wrong (that’s a sign of weakness, in his mind) and doubled down on the Alabama thing, even to the point of using a Sharpie to add Alabama to the path of a hurricane map. (Vox does a good job of explaining the whole situation here.) 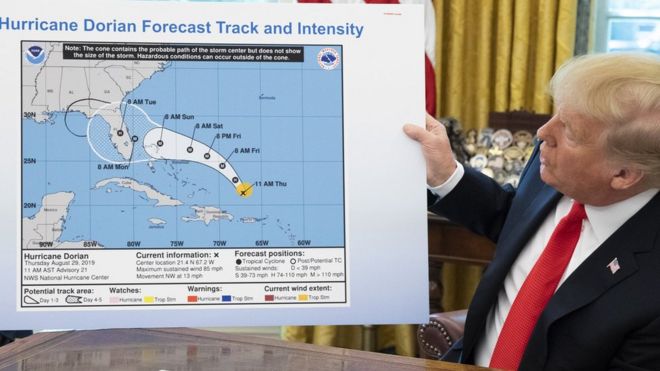 Trump brought fake news into it by issuing several tweets that stated (or, rather, screamed, with exclamation points): “What I said was accurate! All Fake News in order to demean!” and “I was with you all the way Alabama. The Fake News Media was not!” and “Alabama was going to be hit or grazed, and then Hurricane Dorian took a different path (up along the East Coast). The Fake News knows this very well. That’s why they’re the Fake News!”  His most recent tweets, just a few hours ago, go as far as complaining that the Fake News Media (his capitalization, again) hasn’t apologized to him.

I now pause to point out that when Trump issued his original tweet, Alabama was not in the path of Hurricane Dorian and had not been for several days. Trump was wrong. Simple as that.

This is not fake news. It’s just another instance where Trump insists that everyone (and I mean everyone) reporting the facts is (in all caps, as he puts it), Fake News. But here’s the thing. As I point out multiple times in my book Fake News: Separating Truth from Fiction, news is not fake just because you don’t like it. Facts are facts, and calling them “fake” doesn’t change that.

Trump’s attempt to save face by lying about what he said is the very definition of fake news. This bald-faced attempt to rewrite history was so extreme it even drew ire from the normally Trump-friendly Fox News channel. Shepard Smith, a real newsperson at what is mostly an opinion-based outlet, had this to say on his Thursday afternoon broadcast:

“Some things in Trumplandia are inexplicable. The president said that Alabama was at risk from Hurricane Dorian. It wasn’t. Maybe he made a mistake. Maybe he was confused. We don’t know. But he was wrong…

“Why would the president of the United States do this? He decries fake news that isn’t and disseminates fake news that is. Think China pays the tariffs. The wall is going up. Historic inauguration crowds. The Russia probe was a witch hunt. You need an ID to buy cereal. Noise from windmills causes cancer. It’s endless!“

So even a Fox News anchor cries foul on Trump’s abuse of the facts and his use of the term “fake news” to describe factual reporting that is critical of him. (And Trump allegedly instructed aides to “hit back” at Smith in response.) The President can’t simply call things “fake” that he doesn’t like. And he can’t get away with trying to change the facts, even if it’s just with a black Sharpie. He said something wrong and he won’t admit it. That’s pathological, and bringing “fake news” into the equation doesn’t change that.

So it continues. Trump can’t admit to making a mistake, so he makes stuff up that is in direct, provable contrast to what he really said. He then goes ballistic on every news outlet that points out his mistake, calling them all Fake News – when the real fake news is what he did to cover up his mistake. If this were happening on your local school board or neighborhood association, it would be a scandal that forced out the person doing the lying. But we’re talking about the president of the United States, and this bizarre behavior is just one more thing today. It’s the new normal, and it continues to normalize the misuse of the term “fake news.”